Bring out the power of metaphors!

Metaphors can be very powerful solution when it comes to advertising. In this blog I will show you how you can use them in order to improve your marketing campaign and create a powerful presentation for your brand. Let’s start with defining some important aspects related to the communication in the digital world.

Visual communication is an exchange of messages between the eminent and the recipient with help of visual signs, messages, illustrations, images, texts. A person responds to different stimuli, reacts on different contents and brings conclusions that are always equivalent to the quality of his emotions.

Some messages can be clear and simple, but sometimes, when we want to make stronger impression and send message in most creative way we can do it by using metaphors. Metaphors may seem more appropriate for copywriters, but they can be powerful solutions for visual problems, as well.

As consumers, we like to think we choose products based on what we can see, hear, feel, taste and touch about them. Is this a good hamburger? Let’s taste it. Is this a good car? Let’s drive it. But the reality of the situation is that there are a lot of other benefits that products can offer and that can’t be described or felt by our five senses. There are the subconscious elements, the deeper meanings and emotions that some products awake, which influence our decisions to buy or not to buy.

For instance, even though that car can be seen and felt and driven, there are other aspects that determine how we relate to it, such as feelings of power or freedom or security. These aspects are not part of the actual structure of the car, but they are a thing that draws us to the vehicle, so they ought to be part of how the automaker markets and sells it. And that’s where metaphor comes into play.

We can think of metaphors as coming in two varieties: pure metaphor and fused metaphor.

What is pure metaphor?

This is a kind of metaphor that represents a completely different thing from your product; it is used to stand in for the product or feelings we get from it. You can use it when your product is intangible, complicated or simply ”boring“ to look at. But even if it isn’t, you can use pure metaphor in order to stand out from the crowd (your competition). Here is one example: 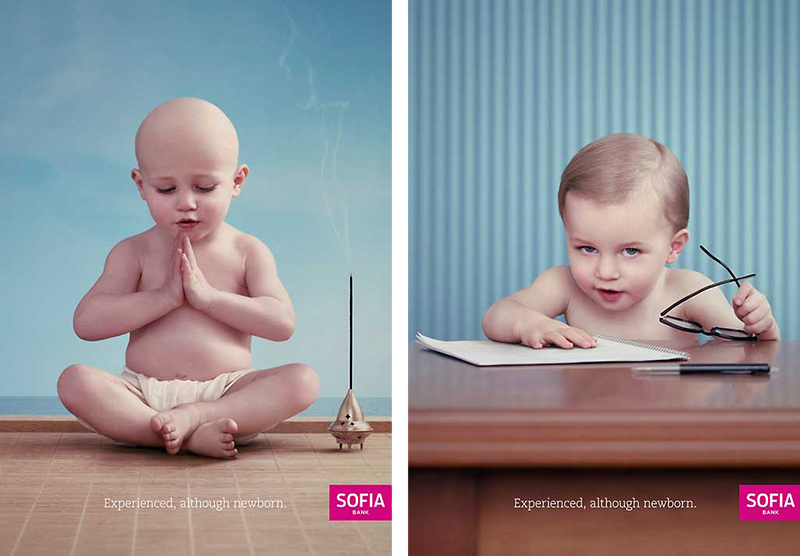 This is an Ad for a bank, but yet, it has nothing to do with banks. Though, when we think it a little bit more, this poster is pure metaphor that wants to emphasize the bank’s maid idea; that even though the bank is new, it probably has a good background and it is reliable. 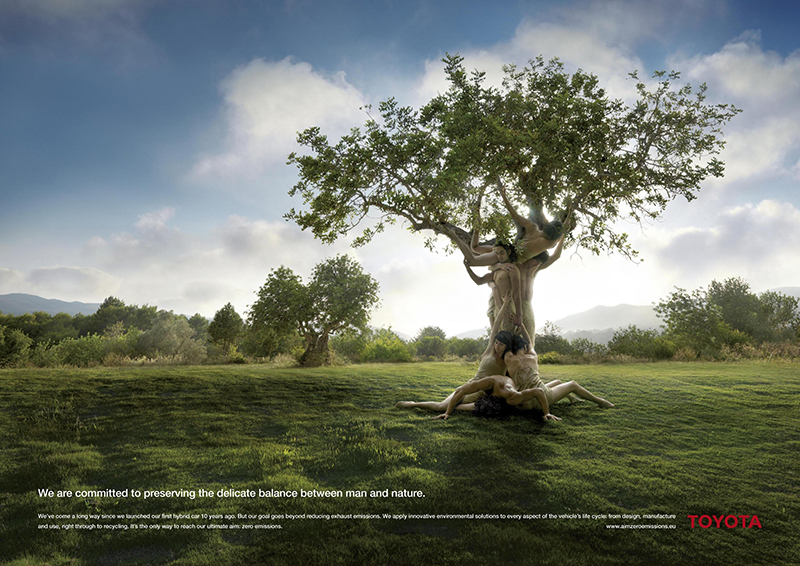 What is fused metaphor?

With a fused metaphor, you take the product, or something associated with it, and combine it with something else. I other words, you don’t simply replace the product with something that can symbolize its characteristics, but „fuse“ it with something. In the picture bellow is shown an ad that stands against genetically engineered foods. It shows a carrot in a form of a scorpion. 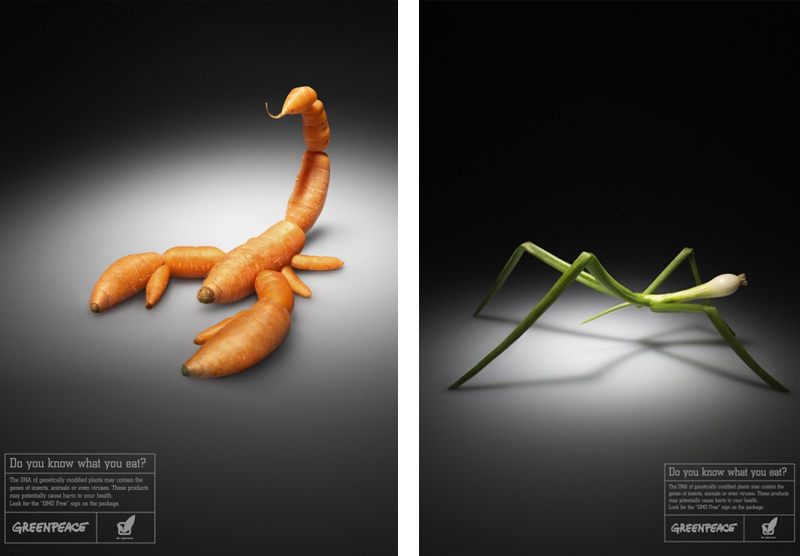 This metaphor shows that genetically modified food is like a poison and bad for your health. That’s why the vegetable took the form of poisonous or dangerous insects.

Here are some other examples of fused metaphor: 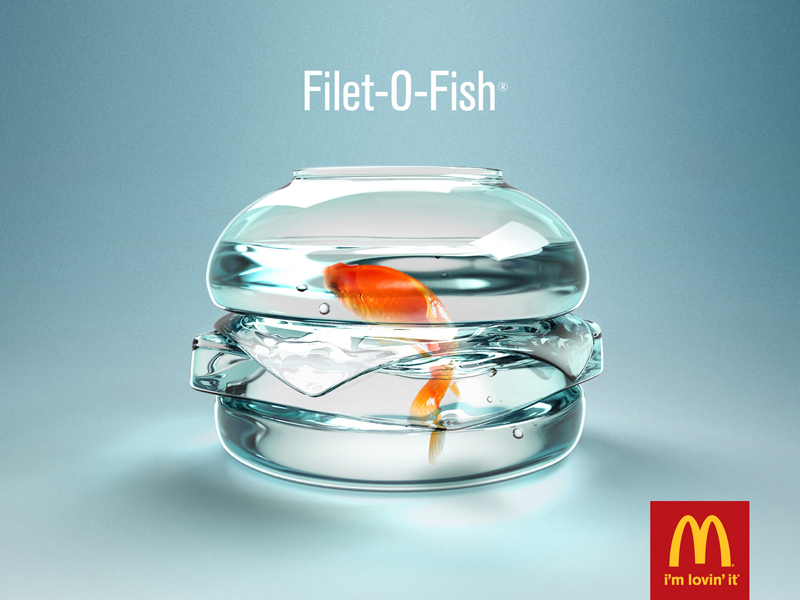 Fused metaphor is much more present in the world of advertising than pure metaphor, because it is easier to show product’s benefits by “fusing” it with something else. Also, it is more comprehensive for an observer to understand the hidden message.

The following example can be mixed with pure metaphor, because it has its elements: super glue is replaced by strong human body. However, there is a tap instead of a head, so it must be considered fused metaphor. 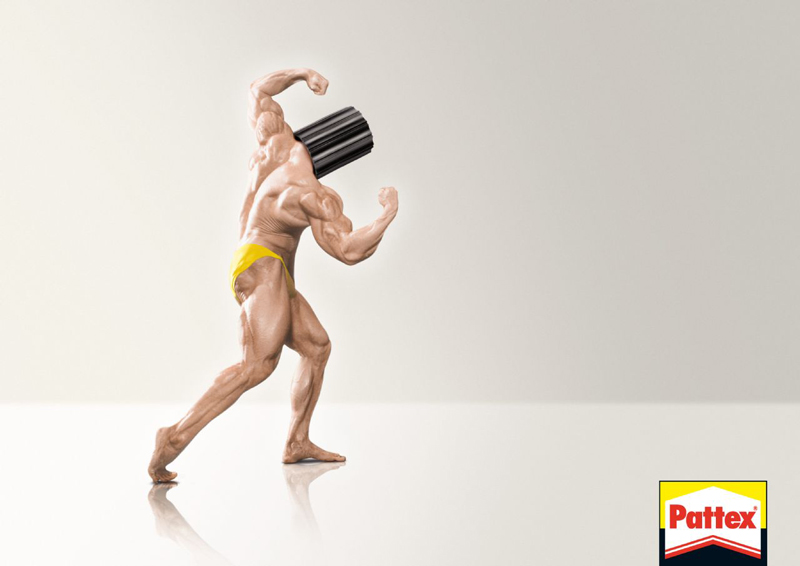 But enough with the theory. What this metaphor wants to emphasize? Well, the strength and power of Pattex glue. It shouts out loud ”if you want a powerful glue, use this one!“

You should get in the habit of searching for pairs in whatever design problem you’re working on. You can mix product’s symbols or aspects of a situation with it, or objects that are somehow related to the product and push these two things together into one image. Think in terms of either addition (adding something to an image) or substitution (replacing part of an image with something else).


How to Find Metaphors?

I am presenting you some uncompleted sentences that should help you find metaphors in whatever sphere of work you are dealing with. Simply put a product into these formats to help you make connections and create images:

Let us imagine that we are making an Ad for Pedigree dog food and want to use metaphors. We should answer these questions:

What is this product? What does it do? It is a pet food, it makes our pets happy, healthy, more cheerful and obedient.

How does it differ from the competition? Petting becomes a game with Pedigree.

What’s the largest claim you can make for the product? That it’s a dog food that dogs really love and that helps you satisfy your pet’s need? The product has a perfect shape to put it in the hands of a person so it would appear like a joystick so, why don’t do it? 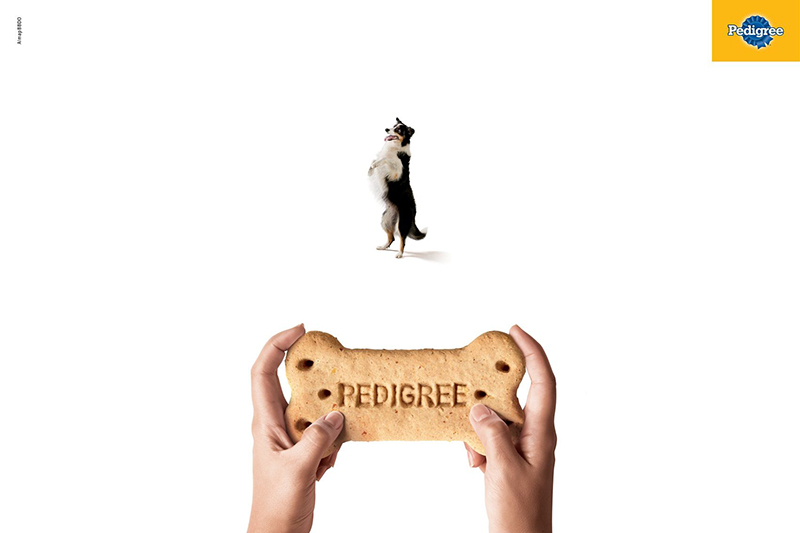 And now, some internal ideas that our company did for one of our clients.

The client is a night club named “Mr Stefan Braun”. As it appears like a name of a man, we created an idea of a mysterious man that knows the secret of having great party time and metaphorically turned the club into a person. What are the main messages that the client wants to send? A party to remember, an extraordinary nightlife, the finest night out, an unforgettable party experience. Want some examples of how we used metaphors? Here you go!

Recognizable design and a good idea. That’s all you need.


If your first ideas are too clichéd, don’t lose hope. Hold out for the second, third or 20th comparison. Metaphors will start pouring out and your originality will show of. But yet, the best ideas, as always, are hard to land on.